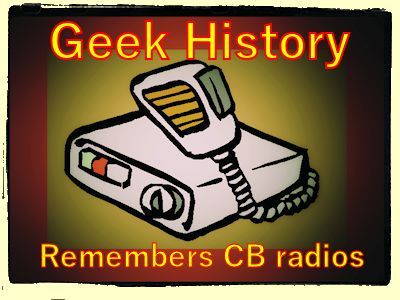 There are many areas where telecommunications, and computers have parallels in their development. For instance, one of the first forms of using technology for social networking was with a phenomenon throughout the 1970s and 1980s known as CB radio.

While some folks may say the CB radio became less popular due to development of mobile phones, the CB radio was not used for personal one to one communications like the modern mobile phone. The CB radio was was used as the information sharing and social networking tool at the time. Truck drivers and motorists used CB radio to locate gas stations during the fuel shortages and rationing of the early 1970's, and to share information on police speed traps.

Movies such as Smokey and the Bandit (1977), television shows such as The Dukes of Hazzard (1979), and novelty songs such as Convoy (1976), established CB radio as a cultural phenomenon during the 1970's.

Similar to chat rooms that came later, the CB allowed people to have conversations in a more or less anonymous manner. Originally, CB required a license and the use of a call sign, but most people ignored this requirement and used made up nicknames known as handles. In fact CompuServe CB Simulator was the first online chat service in the 1980's and it based on CB radio so people would understand the concept.

The invention of the hashtag in Twitter allows people to follow conversations on common topics, and in a more or less anonymous manner jump in and comment on these conversations using made up nicknames. Sounds familiar.

There were numerous reasons why CB radio became less popular. Of course, with any technology, there is always something new and better that comes along. But during the peak of the fad, as I was there in the midst of it, the noise factor was not always due to the technology, but so many people acting like idiots drowning out the conversations of folks just trying to engage in social networking.

A reoccurring theme in social media today seems to be integrating many old school ideas with modern technology. As more and more people recall CB radio, and see the comparisons to Twitter, you have to wonder, will history repeat itself?

Those who cannot remember the past are condemned to repeat it. -- George Santayana