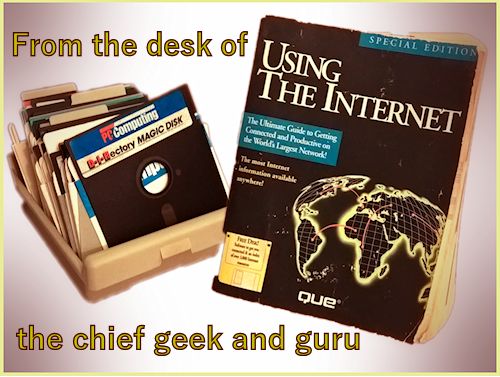 In the early days of personal computers you would purchase software on a 5 1/4 inch floppy disk as shown in this photo.

Typically in the root directory of the floppy you would find a text file named README.TXT or README.1ST that would give you the setup instructions of the program on the floppy disk.

The instructions for use of the Geekhistory website are to open your mind and explore who invented the internet, the history of computers, and the origins of all things geek.

I've read quite a bit on the history of technology that gets very deep in the geek speak. In the spirit of the Guru 42 network of websites, Geekhistory has the mission of "Geek Speak Made Simple."

It's amusing how many of things I learned as a youth that have a different perspective now. I grew up learning that Thomas Edison was one of the most prolific scientists of all time.  I realize Edison was a ruthless man who could be a lunatic at times. Edison was also a bit extreme with stunts such as electrocuting animals in his zeal to prove a point. The more I have studied GeekHistory, the more I have come to appreciate one of Edison's greatest rivals, George Westinghouse.

I learned many years ago that Vladamir Zworkyin was the inventor of television. While I still admire Zworkyin as a scientist, I have since learned Zworkyin was merely a tool used by the powerful David Sarnoff of RCA to wrestle away the credit of the invention of television from another inventor.

In the case of people like Thomas Edison and David Sarnoff the credit for an invention is often based on the the first person to patent the item and being part of the company that was the first to bring that item to the marketplace.

From my desk of references and resources

The collection of material for my study of geek history dates back to my early days in technology as far back as the 1970s. I started working in telecommunications in the 1970s and moved on to office automation in the 1980s.

Computers in the early 1990s were not all that graphical, and access to online services, and eventually the internet, was done on a time limited basis. Your dial up access to your online service included a few hours of access. You did not leave your computer continuously logged on and plugged into the internet as many people do today. You had a plan for what you wanted to get while online, and downloaded the files to be read offline later.

I started teaching how to use the internet, and web building in the late 1990s. I still have a lot of notes from back then, with web site URLs as references for my material. Some of my resources are notes from websites that no longer exist. Very few of the sites still exist in the from they did back then

When I was teaching internet technologies and how to use a search engine in the late 1990s, I found a lot of good reference material on the Altavista website. Thankfully I printed a lot of that content and have paper copies of the material in a binder.

From my perspective as geek and guru

I use the terms geeks and gurus not in a derogatory sense, but as words to describe people who are passionate, and perhaps at time even obsessive, about their work.

I use the term guru to mean teacher. My mantra has always be that my goal is not to tell you how to do something, but to educate, to provide information, so people can make informed decisions.

Although the term "guru" is often used in the same context as "expert" in my humble opinion they should be very different. I avoid self proclaimed experts who profess to know all the answers. They feel their knowledge is absolute. That's why they fail at times. There are very few absolutes in life. Experience is gained from personal perspectives. and it needs to be referenced and put into the proper context when used in other situations.

Telling a story from a different point of view can be interesting. Like many journeys in life, a story can be told from various points of view. One version is not necessarily more or less accurate than another, just that sometimes the perspective of the story teller may bring a few new insights on a topic.

While the future just ain't what it used to be, what you have heard about the past isn't always what you have been lead to believe.