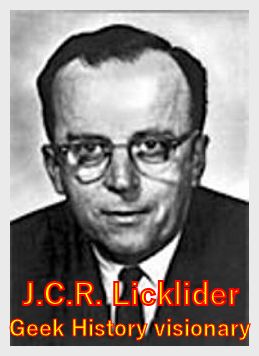 Lick never implemented his vision at ARPA. Licklider moved on, but he left behind his vision of a universal network in others. In a few years after leaving ARPA in 1964, Licklider's ideas were implemented with creation of the ARPANET.

Larry Roberts, the principal architect of the ARPANET, would give credit to Licklider's vision, "The vision was really Lick's originally. ... he sat down with me and really convinced me that it was important and convinced me into making it happen"

The Computer as a Communication Device

In the 1960s computers had generally been thought of as mathematical devices for speeding up computations. Licklider's vision of network applications and predicted the use of computer networks for communications.

In 1968, a year before the ARPANET was launched, Lick co-authored "The Computer as a Communication Device." The 1968 paper starts with the sentence, "In a few years, men will be able to communicate more effectively through a machine than face to face." Licklider's paper described many of the common concepts of the internet we now take for granted.

Lick is often called "Computing's Johnny Appleseed" for planting the seeds for decades of computer research to follow in the birth of the internet.

More deserving of the image of the absent minder professor that that of corporate executive, Licklider never achieved any great amount of fame or widespread recognition.

A true visionary, Licklider was an extremely intelligent and intensely creative man who cared more about whether the goal was accomplished than who got the credit.