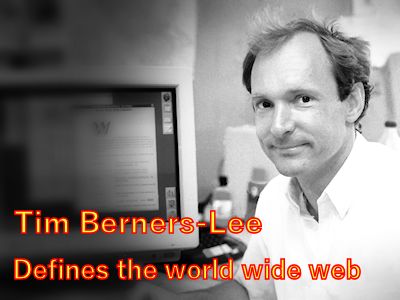 Tim Berners-Lee developed the three main technologies that all computers could use for accessing information over the medium of the Internet: HTML, HTTP and URLs. 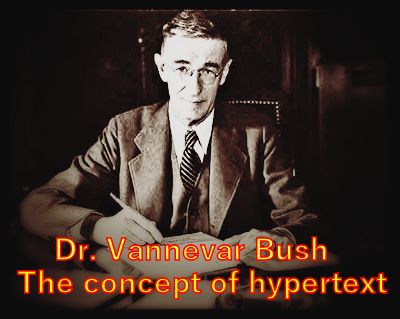 The evolution of HyperText Markup Language

Many people point to a 1945 Atlantic Monthly article called "As We May Think" by Dr. Vannevar Bush as the earliest published vision of the concept of hypertext. Concerned with information overload and the need to make knowledge more accessible, Dr. Vannevar Bush describes a theoretical machine called a "memex" that would be able to make links between documents. The machine was to extend the powers of human memory and association. Just as the human mind forms memories through associations, the user of the memex would be able to make links between documents. Discussing the concept of "making more accessible our bewildering store of knowledge" the article by Vannevar Bush defined many concepts of modern information technology.

Hypertext is defined as a system that allows objects of various types such as text, pictures, and music, to be creatively linked to each other. Ted Nelson, who coined the term "hypertext" in the 1960's, acknowledges his debt to Dr. Vannevar Bush for the concept of hypertext. Ted Nelson conceived a world-wide network that would allow information to be stored not as separate files, but as connected literature. The project known as Xanadu has never been totally completed.

On December 9, 1968, in what has been called "The Mother of All Demos" Douglas C. Engelbart and a group of 17 researchers demonstrated hypertext, object addressing and dynamic file linking during a demonstration of the oN-Line System, also known as NLS, a computer-sharing system, they had been working on since 1962. The public presentation involving two people at different sites communicating over a network with audio and video interface was a session of the Fall Joint Computer Conference held at the Convention Center in San Francisco.

In 1980, while an independent contractor at CERN (European Organization for Nuclear Research), Tim Berners-Lee proposed a project based on the concept of hypertext, to facilitate sharing and updating information among researchers. Tim Berners-Lee left CERN in 1980, and returned in 1984. By 1989, CERN was the largest Internet node in Europe, and Berners-Lee saw an opportunity to join hypertext with the Internet.'

Berners-Lee wrote the first, text only, browser client called 'World Wide Web' and made it available within CERN. It was published on the Internet in the summer of 1991. Berners-Lee spent the next few years refining the main technologies necessary for easy web browsing, URLs, HTTP, and HTML.

Tim Berners-Lee would develop HTML (HyperText Markup Language) as the computer language that would take the collection of wires and computers of the internet, and give them a more universal method of communications that would be known as the World Wide Web. Just as the core networking protocols of the internet represented a radical departure from how things were done prior to their development, the concept of hypertext was likewise a new way of delivering information.