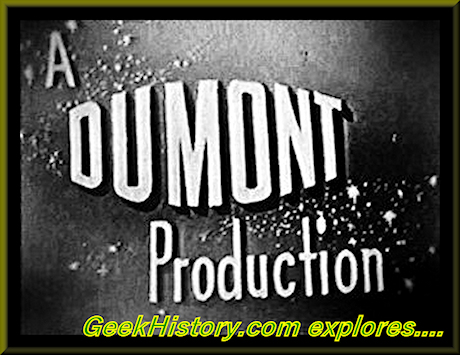 Not long after the DuMont Television Network dissolved a part-time television network, NTA Film Network, was created. The NTA Film Network had over 100 affiliate stations and operated from 1956 until 1961.

The forgotten fourth network lives on

Although DuMont pre-dated videotape many programs were saved on kinescope films. The television show archives were stored in a warehouse until the 1970s when the stored kinescopes were loaded into three trucks and dumped into Upper New York Bay.

A 1996 Hearing Before the Panel of the Library of Congress describes the details of the dumped archives that were destroyed during a legal dispute over who would store and control the recordings.

The forgotten DuMont Television Network lives on with many memories of Jackie Gleason and a sketch called "The Honeymooners."

Jackie Gleason on Cavalcade of Stars 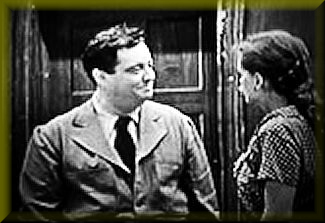 The Cavalcade of Stars would also be responsible for birth of a well know classic TV show, as a sketch called "The Honeymooners" was first performed on the show. It would later be picked up by the CBS Network as part of the Jackie Gleason Show and become a television classic.

As a history lover, and someone always digging to learn more about the history of technology, I discovered the DuMont Television Network while doing some research on the Internet Archive. If you do a search on the DuMont Television Network at the Internet Archive you will find quite a bit of old videos of station IDs, commercials, and shows from this long lost network.  It is worth the watching and downloading just to see a treasure of television history videos.

The video of Jackie Gleason on "Cavalcade of Stars" (1951) is a rare find for any history of television fan. The well known sitcom called "The Honeymooners" was based on a sketch first performed on Cavalcade of Stars.

One other notable show was Captain Video and His Video Rangers as it was the first science fiction show on television. While by today's standards the series looks pretty primitive, it was quite groundbreaking for the time.

The Internet Archive is a non-profit organization on a mission to build a digital library. Just like a visit to your favorite museum or traditional paper library, they provide free access to researchers, historians, scholars, and the general public to digital files on a wide variety of topics.

The way of finding things on the Internet Archive can be more like exploring a museum, that searching a catalog at the library.  For example, I was looking for the link to my very groovy 1969 Pontiac GTO Commercial starring 1960s rock band Paul Revere And The Raiders. I searched on Pontiac, and I searched on GTO, and I could not find it.  It was only by going to the link for Car Commercials 1966-1970 that I found the file I was looking for on a long list of files of car commercials.

Most of the files of commercials I found  simply by searching the site rather than using the indexes.  Once you find one type of file you like, you can see how it is tagged and search for similar files. I love cars of the 1950s and 1960s, so I searched and found commercials for the 1957 Edsel, the 1958 push button transmission Dodge, the 1960 Ford Thunderbird, and a very groovy 1969 Pontiac GTO Commercial.

From the Animation and  Cartoons section I have download numerous files of shows I watched on television back in my youth.  Of course my kids think it is all pretty silly, but I get a kick out of cartoon classics like Woody Woodpecker and Betty Boop. There are also some of the classic super hero cartoons like Superman. The quality of the files vary, but I enjoy downloading a bunch and creating my own mix of cartoon classics that I burn to DVD.

The Internet Archive is a great online library of video files. Thousands of files are available to be downloaded and viewed offline. Much like your favorite museum or traditional paper library,  If you love the history of technology, or the history of entertainment, what could be more fun than a vault full of old black and white movies, free for you to download or watch at your leisure.