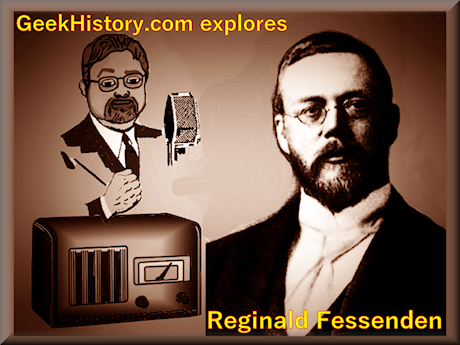 After leaving Edison in 1890, Fessenden went to work for the United States Company, a division of the Westinghouse Company in New Jersey. Fessenden's patent for "Lead-in Wire for Incandescent Electric Lamps" developed while working for Westinghouse would later be used by Westinghouse in defeating Edison in the War of Currents.

After a brief stint with the United States Company, Fessenden moved on to the Stanley Company in Pittsfield, Massachusetts in 1891.

In 1892, Fessenden accepted a position as Professor of Electrical Engineering at Purdue University in West Lafayette, Indiana. Although he stayed there for only one year, he was responsible for establishing the Electrical Engineering Department at the university.  While at Purdue Fessenden helped the Westinghouse Corporation install the lighting for the 1893 World Columbian Exposition in Chicago.

Reginald Fessenden, was chair of the University of Pittsburgh electrical engineering department from 1893 to 1900. During the seven years that Fessenden worked for the University he developed his long held theory that speech could be transmitted by wireless waves. He found a Pittsburgh lawyer Darwin Wolcott, familiar with patent applications to register his theories. 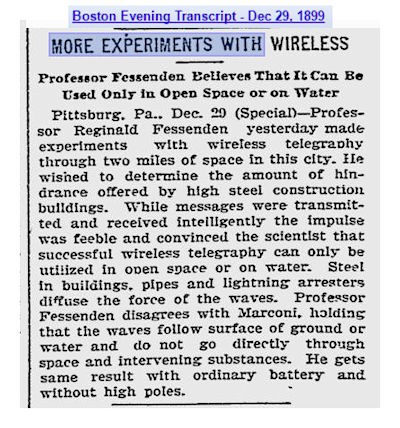 For as amazing as his discoveries were in hindsight, while they were happening they were barely being noticed. A very small mention in the Boston Evening Transcript of December 29,  1899, reports on Fessenden's early experiments with wireless telephones in Pittsburgh.

Fessenden's days in Pittsburgh were a stable and productive time for him.  Helen Fessenden reflects on her husband leaving Pittsburgh to go to work for the Weather Bureau in the biography she wrote after his death.  "Reg decided to accept this offer and March of 1900 found us pulling up roots that had begun to feel themselves almost in native soil."

Fessenden gave up his academic position in 1900 to accept an offer from the United States Weather Bureau to develop a wireless network for communication with weather stations.  The terms and conditions of Fessenden's employment with Weather Bureau stated, "The Government cannot legally pay for the patents issued to you, but by the proposition herein made, you are allowed a salary that will enable you to easily bear such expense and thus own the patents."  Fessenden thought the job with the U.S. Weather Bureau would be a great opportunity to test his ideas on radio.

In the fall of 1900 Fessenden began to set up equipment in order to demonstrate his theories of Wireless Telephony to the Chief of the Weather Bureau and to Professor Marvin, head of the instrument division. Based on work from his days in Pittsburgh, Fessenden set up a test between Cobb Island and Arlington, Virginia.

Between two masts 50 feet high and one mile apart, intelligible speech by electromagnetic waves was transmitted. Fessenden had proven his concept, and while he admitted the original devices were very noisy, Fessenden was happy to describe the voice transmissions as "distinct and entirely intelligible."

In 1902 Fessenden continued his research with his own company, National Electric Signaling Company (NESCO).  Back in the day when radio was being developed as wireless telegraphy, Fessenden had the vision to replace dots and dashes with voice and music.

On Christmas Eve 1906, Fessenden broadcast to ships at sea the first music and voice program which included himself playing the violin and reading from the Bible. Transmitting from a station he built on Brant Rock, Massachusetts, Fessenden’s program included two musical selections, a poem, and a short talk. Wireless operators as far away as Virginia and ship wireless operators within a radius of several hundred miles heard this first radio program.

Over the next several years Fessenden would work on developing the technology of radio, while constantly battling with lawyers and investors trying to create the business that would manage his inventions.

The invention of radio seems like it should have been a simple idea, but discussing the concept of radio stirs up some of the most fascination and complex debates over the history of technology.

Reginald Fessenden seemed to always be involved in a battle to establish his ownership in the invention of radio.   During the first few decades of the twentieth century, the US Government, specifically the US Navy, thought that wireless should be controlled by the government. Fessenden advised the US Navy in 1904 they were infringing on his patents, but the US Navy considered itself under no obligation to respect his patents.   During WW I the US government used the war as an excuse for the Navy to gain full control over American wireless.  The government took over all private radio stations, local police in New York seized over 800 amateur stations. Stations owned by American Marconi were taken over and added to the Navy's communication network.

After the war the Navy began pushing a scheme to form an American company with no foreign interests to control American radio.  With the belief that radio was a natural monopoly, the Radio Corporation of America was formed in 1919, and American Marconi was forced to turn over all of its stations and employees to the new corporation. Essentially a government sanctioned monopoly was created. The cross licensing of radio patents was to be done between members of the newly formed Radio Trust, a group that included RCA, GE, Westinghouse, and United Fruit. American inventors such as John Stone and Reginald Fessenden that had created companies to compete against American Marconi were swept up in a mess of patent issues.

After many years of patent litigation Fessenden settled his outstanding lawsuits with RCA and the Radio Trust in 1928.  He was initially awarded $2,500,000 but he eventually settled for $500,000.  Fessenden fought the battle against the Radio Trust and won the right to be called the father of radio. Fessenden retired to the island of Bermuda and died there in 1932, relatively unknown.

A deep appreciation for Fessenden

In answer to the question of who invented radio there are some Canadian members of the Institute of Electrical and Electronics Engineers that will be quick to point out that Canadian inventor Reginald Aubrey Fessenden should be recognized as the "father of radio."

For years I was content with the common story that radio was primarily the work of Marconi. Thanks to the marvels of the modern internet, in recent years I have read many myths and legends spread by Nikola Tesla fans proclaiming Tesla the inventor of radio. The more I researched the question of "who invented radio" the name of Reginald Fessenden came up often in my research.

In the end I developed a greater appreciation of the forgotten geeks like Reginald Fessenden, one of the most important inventors in the evolution of radio.