Motion pictures, a series of still images which, when shown on a screen, creates the illusion of moving images, or as we sometimes call them, movies, are a different field from television.  But the early days of motion pictures actually set the standard for the concept of aspect ratio, the relationship of height to width of an image. For many years the standard movie screen, as well as the standard analog television, had an aspect ratio of 4:3.

The evolution of round screens to rectangular

The cheapest and easiest way to manufacture a CRT was to make it round. But the aspect ration of 4:3 lends itself to a more rectangular design. The CRT slowly evolved to being essentially rectangular in shape but it had rounded edges because it was a glass tube. You could not create a perfect rectangle using the process that created the glass cathode ray tubes in the early days of television. 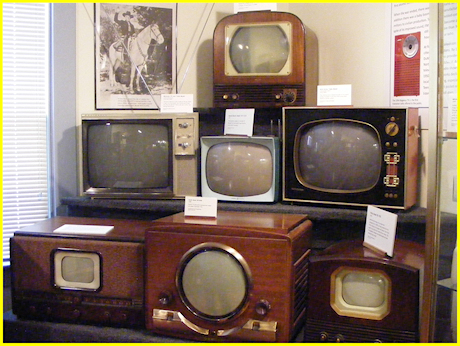 If you look at the photo of various televisions you see a variety of screen sizes as well as shapes, and you can see the evolution of round screens to rectangular. The attached photograph was taken at the National Capital Radio and Television Museum, a cool little geek history museum located in Bowie, Maryland. It is a small house jam-packed with displays on the history of radio and television. The extremely knowledgeable staff was full of stories about everything on display and ready to answer any question. The museum does a great job of preserving technology history.

Increasing the number of channels

During the 1940s and the 1950s broadcast television stations in the United States were primarily transmitted on the VHF band, channels 2-13.  If you live in a large city you will notice the long established stations usually are lower numbered.  Television manufacturers like RCA, ran their own networks, such as NBC. Since the major TV networks were well-established on VHF, many smaller stations on the UHF band, channels 14 to 83, were struggling for survival. Fourth-network operators such as the DuMont Television Network were forced to expand using UHF channels due to a lack of available VHF channels.

In 1961 the United States Congress passed the All-Channel Receiver Act (ACRA) to allow the Federal Communications Commission to require that all television set manufacturers must include UHF tuners. All new TV sets sold after 1964 had built-in UHF tuners.  The All-Channel Receiver Act allowed the UHF TV stations to grow and eventually would outnumber the long established VHF stations.

What happened to Channel 1?

When I was young, and the television had a rotary dial that took me from channels 2 through 13, I always wondered, what happened to channel 1? In 1948, Channel 1 frequencies were deleted from those allocated to television use and given over completely to radio services. The FCC decided not to renumber the channels since many televisions were being made using the existing channel numbers.

Reasons Why, The (Part I)  https://archive.org/details/reasons_why_1

Reasons Why, The (Part II)  https://archive.org/details/reasons_why_2

Classic scenes of geeks from the 1950s showing various facets of television set design, engineering, and quality control. The RCA manufacturing videos are part of a section of the Internet Archive known as the Prelinger Archives, a collection of over 60,000 advertising, educational, industrial, and amateur films.

Created in 1992 primarily to document the history of the Cathode Ray Tube it does a nice job of illustrating the basic concept of the CRT. It also includes a bit of television history showing the evolution of the CRT.

A propaganda infomercial by RCA to brag about what they have done in the world of television. Not the most historically accurate account of television, but still a very interesting bit of geek history.

Spending a Saturday morning at the Internet Archives (archive.org) is like going to the library or your favorite museum, and the best part about it is that you don't need to leave the comfort of your home computer desk.

All of the video files can be viewed for free online, and many are available to be downloaded and viewed offline. The Internet Archive does a decent job of making sure copyrights are not violated.  Most of the files are public domain, but some may occasionally have some restrictions for use and are marked as to how they may be used.  Because copyright laws have changed from time to time over the years, many of the files are considered public domain, or copyright free, for a variety of reasons.

The Internet Archive does a decent job of making sure copyrights are not violated.  Most of the files are public domain, but some may occasionally have some restrictions for use and are marked as to how they may be used.  Because copyright laws have changed from time to time over the years, many of the files are considered public domain, or copyright free, for a variety of reasons.  All of the video files can be viewed for free online, and many are available to be downloaded and viewed offline.