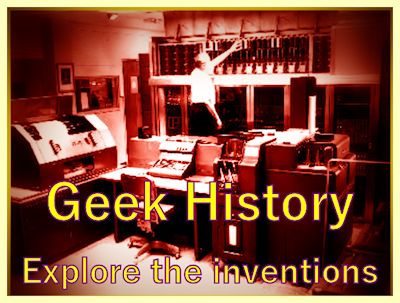 GeekHistory puts "who invented it" into perspective.

Before you can answer the question as to who invented something, you need to define invention. People want to assign credit and glory to "who invented it" looking for those special individuals have those "eureka" moments.

Technology is an ongoing evolution of experiments and improvements. Very seldom is a new product or process in the world of technology the result of one "eureka" moment of a single inventor in a laboratory.

The following quote by Mark Twain that really nails it when it comes to inventions and inventors. “It takes a thousand men to invent a telegraph, or a steam engine, or a phonograph, or a photograph, or a telephone or any other important thing—and the last man gets the credit and we forget the others. He added his little mite — that is all he did. These object lessons should teach us that ninety-nine parts of all things that proceed from the intellect are plagiarisms, pure and simple; and the lesson ought to make us modest. But nothing can do that.”

Who invented the internet?

Who invented the television?

Next to the internet, arguably the next most significant invention, as far as impact on the life of the average American, is the television. But how many Americans can actually tell you who invented it? There are many arguments here as well, as to who should get credit for inventing the technology used in the first commercial televisions.

My lifelong love of history and technology comes together at GeekHistory. I began working with radios and telecommunications in the Army National Guard in the 1970s and my first certification was a FCC general class radiotelephone license. A life long evolution from field service technician for various office automation companies through my current career in systems administration and telecommunications has inspired me as a writer and web developer of technology topics.The idea for the website GeekHistory started out with teaching Internet and browser basics courses in 1996. Even though the internet went commercial in the mid 1990s, I would start each course with a brief history lesson showing the evolution of the internet that started in the 1960s. I registered the domain GeekHistory.com back in 2001. It was just a shell of a website for many years, just an idea bouncing around in my brain.

I am not a university professor with a team of editors and advisers working with me developing a website. I am one man who loves technology and history and is amazed by how little people know about the great minds in the world of technology. Geek History is not meant to be an authoritative source for technology history. In depth discussions of the technology is kept to a minimum. We are just trying to get you to think about the many amazing people that have contributed to the work of technology. Our goal is to increase awareness, educate, and entertain. One of my inspirations for the Guru42 Universe is the Oliver Wendall Holmes quote, "Man's mind once stretched never goes back to its original dimension." The more I learn about geek history, the more questions I have, and the more I want to know.