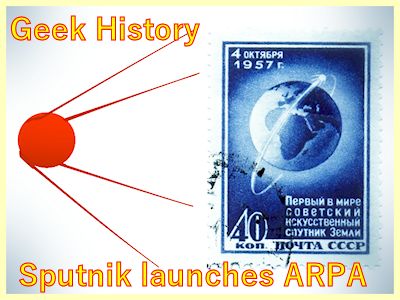 Is it ARPA or DARPA that created the ARPANET

The RAND Corporation was founded after the second world war as a research agency for the United States armed forces by Douglas Aircraft Company. RAND became an independent, nonprofit organization, that focused mostly on cold war related military issues.

According to the RAND website on Paul Baran and the Origins of the Internet:

"In 1962, a nuclear confrontation seemed imminent. The United States (US) and the Union of Soviet Socialist Republics (USSR) were embroiled in the Cuban missile crisis. Both the US and the USSR were in the process of building hair-trigger nuclear ballistic missile systems. Each country pondered post-nuclear attack scenarios."

"A looming concern was that neither the long-distance telephone plant, nor the basic military command and control network would survive a nuclear attack."

According to their website RAND is the first organization to be called a "think tank." The RAND name originated as a contraction of Research and Development. RAND continues to operate today as a nonprofit research and analysis institution across a broad range of subjects.

While some people still debate whether the original purpose of the internet was for the military, the internet was originally conceived by the RAND Corporation, a think tank that focused mostly on cold war related military issues as RAND pondered post-nuclear attack scenarios

Why was the internet created?

But the February 1993 article on the Internet Society website "Short History of the Internet by Bruce Sterling" begins with the following paragraph:
"Some thirty years ago, the RAND Corporation, America's foremost Cold War think-tank, faced a strange strategic problem. How could the US authorities successfully communicate after a nuclear war?"

Various RAND and DARPA statements connecting early Internet projects to cold war fears and the desire to survive a nuclear attack are stated on their website, not part an isolated study.

I grew up in the fields of telecommunications and computer networking, my personal studies of inventor and inventions are in the areas of telecommunications and computer networking technology, so some people might say that my perspective is accordingly biased to relate personal experiences and observations in those areas. Maybe it is not politically correct to say the catalyst for the creation of the Internet was part of post-nuclear attack scenarios, but statements made by RAND and DARPA regarding the mission of the early internet pioneers make it easy to draw that conclusion..