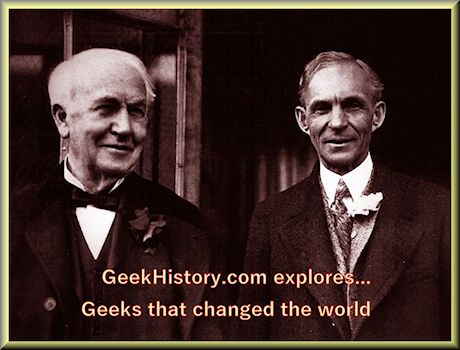 Henry Ford built his first car, the Quadricycle, while he was employed at the Edison Illumination Company. Ford could have had a successful career in the electric power industry but left working for Edison in 1899 to start his own business of designing gasoline-powered automobiles. Ford assembled a team of 13 to form The Detroit Automobile Company. His original company failed because his investors pressured Ford to develop a luxury vehicle for the wealthy, as Ford stalled for time trying to perfect a lower cost vehicle he could sell to the masses.

On June 16, 1903, Henry Ford incorporated the Ford Motor Company. In October of 1908 Henry Ford introduced the Model T, with a four-cylinder, 20-horsepower engine, that could reach speeds of 40 miles per hour. The Ford Company started selling the Model T in 1908 at a cost of around $850. Constantly improving upon his assembly line mode of production Ford was able to decrease the price of a Model T to around $350 over an eight year period. Working to drive the cost of the vehicle down, Ford converted the automobile from an expensive curiosity into a practical conveyance. Henry Ford did not invent the automobile or the assembly line, but he developed and manufactured the first automobile that many middle class Americans could afford. By the end of the Model T's run in 1927, fifteen million had been built and sold. 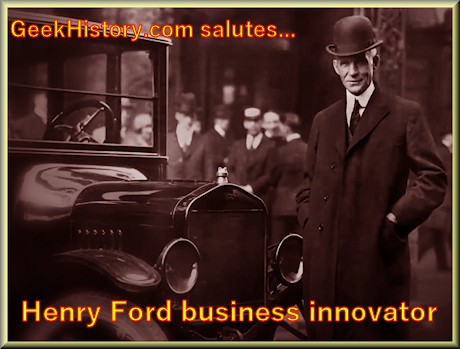 Ford boasted that the "Five Dollar Day" would not simply reduce worker turnover, which was an increasing problem, it would increase business by allowing workers to be consumers of the products they made. The publicity and media frenzy over the workers pay increase created a tremendous amount of publicity for the Ford Motor Company, and transformed Henry Ford the businessman into a hero, as thousands of newspapers published his biography.

In just a few short years the Ford Motor Company turned the original twelve investors into millionaires. Two of the original investors would go on to make a name for themselves in the automotive industry. As owners of one of Detroit’s large machine shops John Dodge and Horace Dodge were contracted to provide mechanical parts for Ford. The Dodge brothers contributed $10,000 in materials and cash to Ford. For ten years, the Dodge brothers' company was supplier to Ford. In 1913 the Dodge brothers terminated their Ford contract and devoted their energies toward producing a Dodge automobile. Henry Ford bought out the Dodge brothers of Ford in 1919 for $25,000,000.

Ford revolutionized transportation and American industry. By making the automobile affordable for the average American, and by shaking up the work force with new ideas on labor, Henry Ford profoundly impacted the landscape of the twentieth century,

The Legacy of Henry Ford

Henry Ford was not the first to attempt the production of low-cost, reliable automobiles. Henry Ford succeeded as the first to make cars affordable to average Americans with the Ford Model T. Ford's River Rouge factory become famous for their low-cost, standardized mass production. Ford's development of the assembly line allowed Ford to increase production from just over 32,000 cars in 1910 to nearly 735,000 cars in 1916. By the end of the Model T's run in 1927, fifteen million had been built.

Henry Ford and Thomas Edison were fellow geeks and lifelong friends, who loved to tinker with their gadgets. They were also business innovators with massive egos who became legendary heroes in their day. They knew how to dominate the spotlight and use their fame to promote their businesses.

Even if Henry Ford invented nothing his innovations changed everything.

In this chapter of geek history as we explore the lives of famous geeks we focus on the inventors as well as the inventions. In the next article we take a look at Henry Ford's Greenfield Village, a shrine to his life long friend Thomas Edison.