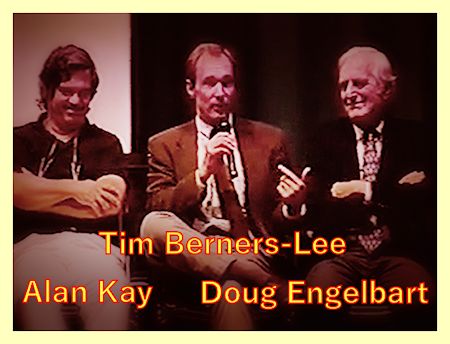 If we look at geeks as technology pioneers that turn visions into reality, the Vannevar Bush Symposium in October 1995 represented the ultimate geek convention. The Vannevar Bush Symposium, co-sponsored by Brown University and MIT, celebrated the 50th anniversary of Vannevar Bush's article "As We May Think." Many people point to the 1945 Atlantic Monthly article "As We May Think" as the earliest published vision of the concept of hypertext.

In October 1995, when the event took place, the graphical user interface, desktop personal computers, and access to the internet were all in the early stages of making their way into our homes. Many of the speakers at the event were the technology pioneers who took the vision of hypertext conceived by Vannevar Bush and transformed it into the current form of what we now call the World Wide Web, such as Ted Nelson, Douglas C. Engelbart, and Tim Berners-Lee. Other notable speakers at the event included internet visionary Bob Kahn and computing pioneer Alan Kay.

Ted Nelson coined the term "hypertext" in the 1960's, acknowledges his debt to Dr. Vannevar Bush for the concept of hypertext. Ted Nelson conceived a world-wide network that would allow information to be stored not as separate files, but as connected literature. The project known as Xanadu has never been totally completed.

Douglas C. Engelbart and a group of 17 researchers demonstrated hypertext, object addressing and dynamic file linking during a demonstration of the oN-Line System, also known as NLS, on December 9, 1968, in what has been called "The Mother of All Demos." Engelbart and his team had been working on the computer-sharing system since 1962. The public presentation in 1968, involving two people at different sites communicating over a network with audio and video interface was a session of the Fall Joint Computer Conference held at the Convention Center in San Francisco.

Tim Berners-Lee proposed a project based on the concept of hypertext, to facilitate sharing and updating information among researchers, in 1980, while an independent contractor at CERN (European Organization for Nuclear Research). Tim Berners-Lee left CERN in 1980, and returned in 1984. By 1989, CERN was the largest Internet node in Europe, and Berners-Lee saw an opportunity to join hypertext with the Internet.

Bob Kahn approached Vinton Cerf in the spring of 1973 with the idea of developing a system for interconnecting networks. Kahn and Cerf published "A Protocol for Packet Network Intercommunication" in May 1974. The work of Kahn and Cerf established Transmission Control Protocol (TCP) and Internet Protocol (IP), as the building blocks of the modern internet.

Alan Kay developed graphical user interfaces and prototypes of networked workstations at Xerox Corporation's Palo Alto Research Center (Xerox PARC) in the 1970s. Alan Kay has worked for Apple, Atari, HP, and Disney, and is known for the quote, "The best way to predict the future is to invent it.

The outline of the two day Vannevar Bush Symposium on the Doug Engelbart Institute website includes links to the video archives from the 1995 event available online at the Internet Archive.