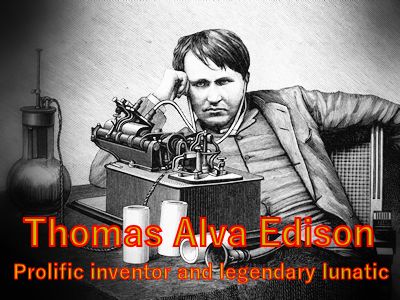 How many inventions and innovations made in the name of Apple or Microsoft were not the direct work of Gates or Jobs? How is Edison getting credit for the work of his staff any different that the large number of engineers, designers, and programmers working for Microsoft or Apple, but all we hear about is the success of Bill Gates or Steve Jobs?

Likewise the term industrialist is used like it is mutually exclusive of being an inventor. Why is that? Steve Jobs was an industrialist, in some ways much more so than Thomas Edison, in that he was a leading figure in his industry. But the world today seems to see Steve Jobs as a hero, and Thomas Edison as a villain. In many ways I see Edison as very similar to Steve Jobs.

Edison became a wealthy man, and was always finding new ways to get wealthier. Much like the modern day geek cult heroes like Steve Jobs, Thomas Edison was far from perfect. Thomas Edison was often accused of taking credit for the creative work of his others and rushing crude discoveries to the patent office to secure his royalties.

Edison loved the tinkering and inventing, but he understood that inventing was much more than just having an idea. He was a unique mix of genius inventor and shrewd businessman. He was a systems thinker and a project manager. Edison took the image of an inventor as one man tinkering alone in a shop and turned it into an industry. He paid workers to conduct numerous tedious experiments so he did not have to do the boring manual tasks himself. I think that is pretty genius.

At a time when the world was changing rapidly as the industrial age was introducing new technology to everyday life Edison created the image of the mythical inventor. He used his image as the great American folk hero in the press to his advantage to tease the world that he would produce incandescent light long before he had it ready.

As much as we can learn from Edison on his creation of the invention factory, there's also a dark side to Edison that showed a compulsive workaholic obsessed with success at all costs.

There are several versions of the story surrounding the death of his first wife, Mary Edison. Many books say that Mary died of typhoid, her death certificate states that she died of "congestion of the brain." One popular story tells that Mary Edison died of a morphine overdose as a result of complications from her third pregnancy. Complications from pregnancy, as well as use of morphine as a pain killer, were not uncommon in the 1880s. Even thought Edison's lab was only a few miles from his home, it is told that it took him three weeks to visit his home when he received word that his wife was ill. Mary Edison died at the age of 29.

One invention not always listed on Edison's list of accomplishments is the electric chair as a method of execution by electrocution. Despite publicly denouncing capital punishment, Edison secretly financed the alternating current electric chair developed by inventor Harold Brown. New York State purchased three of Brown's electric chairs In 1888, one each for the penitentiaries at Auburn, Dannemora, and Ossining ("Sing Sing").

The first execution by electrocution was reported to be gruesome and messy. George Westinghouse was quoted to have said, They would have done better using an axe. Edison used the creation of the electric chair to warn Americans that if they used AC power, they risked being "Westinghoused." Much to the pleasure of Edison, "Westinghoused" became a slang synonym for death by electric chair.

Edison's obsession with proving that AC was deadly did not stop with his support for the electric chair. Edison used the public electrocution of animals to show the dangers of AC (alternating current).

I have read articles by defenders of Edison that claim stories of Edison using animals in experiments and demonstrations are just not true. A story in Smithsonianmag.com describes how Edison wired electrodes to several calves and a horse, at his West Orange laboratory to illustrate the dangers of AC power for a New York State committee impaneled to investigate the use of electricity in executions. The Smithsonianmag.com article also describes in detail a demonstration of the lethal power of alternating current for reporters done by Edison. "He rigged a sheet of tin to an AC dynamo and led a dog onto the tin to drink from a metal pan. Once the dog touched the metal surface, it yelped and the little cur dog fell dead.

Thomas Edison seems to be the man that people love to hate. There are many places that include the electrocution of Topsy the Elephant as part of the War of Currents, the famous business and technology battle between Edison and Westinghouse.

Before the term geek became associated with an enthusiast in the technological world it was originally associated with a carnival performer often billed as a wild man. Did Edison show his carnival performer wild man side by publicly electrocuting an elephant to show the dangers of alternating current? Was Edison still bitter from the War of Currents to use the electrocution of an elephant to make his point nearly a decade later?

Topsy the Elephant belonged to the Forepaugh Circus and spent the last years of her life at Coney Island's Luna Park. Because she killed one trainer, who burned her trunk with a lit cigar, and subsequently became aggressive towards two other keepers who had struck her with a pitchfork, Topsy was deemed a threat to people by her owners and killed by electrocution on January 4, 1903 at the age of 36.

The electrocution of Topsy the elephant was in 1903. The War of Currents was over, for all practical purposes it ended in 1893. Westinghouse won the contract to power the Columbian Exposition Worlds fair in Chicago, followed by the award of the Niagara Falls Power plant contract to Westinghouse. By 1903 Edison was not involved in Edison Electric, he lost control of it in 1892 when it became General Electric.

According to the Thomas Edison Papers at Rutgers University: "Edison was not present. The electricians who electrocuted Topsy were connected with the 'Edison Company.' This likely refers to New York Edison, the predecessor to ConEd. Edison had not been part of the company for many years."

Edison loses the War of Currents

In the end his stubbornness and drive to succeed would be the downfall of Edison in losing to Westinghouse in the War of Currents. By refusing to support AC power plants over DC, Edison lost the backing of investors and eventually his company. The company created as Edison Electric would become General Electric.

In the War of Currents, Edison was pretty passionate about proving that DC was better than AC for providing electricity. He truly believed that AC was dangerous, and many of the things he did was because of that belief. Later in life he admitted his mistakes in being blinded by his ambition. There's a lot more on the "War of Currents" in the articles that follow.

Edison's loss to Westinghouse was a disappointment, but his career was far from over. At a time when the world was changing rapidly Edison created the image of the mythical inventor and became the great entertainer with his inventions that brought us music and movies.

In our next chapter we will tell you why you don't need to be a genius to know why Thomas Edison was popular.