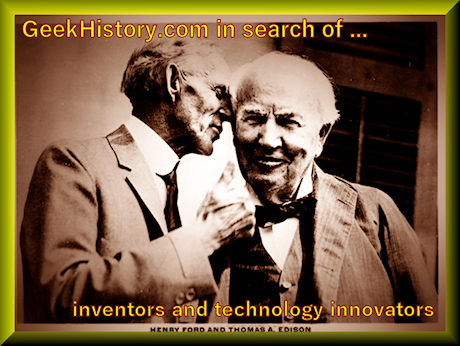 Are the traits of inventor and businessman mutually exclusive?

I often see sarcastic remarks in various forums that Thomas Edison was not an inventor, he was a businessman. The remarks are often made in the context of degrading Edison. For many years Thomas Edison was one of the most popular inventors of American history, he was honored and respected. The internet has created many myths and legends, and now in some circles Edison has become the Devil.

George Westinghouse was an inventor, starting with products such as the railroad air brake that made trains safer. Westinghouse, like his contemporaries Thomas Edison and Henry Ford, turned industrialist having found that to profit from an invention one must undertake manufacturing and marketing as well.

Being a geek is not always creating entirely new ideas, but often taking existing ideas and putting them to work in new ways, taking them to new heights.

What does it take to become a great inventor?

Being an inventor is not a field of study, it is a state of mind. The nature of man is solving problems, and the solutions to these problems are inventions.

Using a tree branch to help us pry something apart, we have invented a lever. Using a tree trunk that rolls to help us move something heavy, rather than dragging it across a flat surface, we have the beginnings of a wheel. As these very simple solutions to very simple problems became refined, they become inventions.

Great inventors, innovators, industrialists, all had one thing in common, a passion for their ideas, and a passion to turn their visions into reality. There are endless stories of "inventors" who were always tinkering with things. They had a burning desire to understand how things worked.

Why is Steve Jobs considered an innovator and Thomas Edison a thief?

It's funny when someone asks, "Has Apple ever invented anything original?" and the answers that say that Steve Jobs was an innovator not an inventor, are widely accepted as positive. People praise answers stating that Steve Jobs was great for picking the right set of existing ideas and combining them in a new ways to make better products.

When Thomas Edison takes existing ideas and combines them in new ways to make better products, he is called a thief. Edison did not invent the light bulb, he made a better light bulb, one that was more practical than the ones the others had created. That is exactly what innovation is all about, pick the right set of existing ideas and combine them in a new way that works better than before.

How is Edison's invention factory any different that the large number of engineers, designers, and programmers working for Microsoft or Apple, but all we hear about is the success of Bill Gates or Steve Jobs? How many inventions and innovations made in the name of Apple or Microsoft were not the direct work of Gates or Jobs?

I would call Steve Jobs an innovator, rather than an inventor. But much like Henry Ford, even if he invented nothing, he changed everything. Being a geek is not always creating entirely new ideas, but often taking existing ideas and putting them to work in new ways, taking them to new heights.

That is exactly what creating something new is all about, pick the right set of existing ideas and combine them in a new way that works better than before.

The perspective of the story teller

GeekHistory is not a series of top ten lists, but stories to help you understand and appreciate great inventors and technology innovators.

There are many inventors and innovators that deserve to be on the same list as the more well known geeks like Thomas Edison as far as what they accomplished. The names are not commonly known for a variety of reasons. Some inventors preferred to stay out of the spotlight. Some of them worked in small towns and remote locations that did not attract attention.

We look at topics from various angles and stretch your brain to see different perspectives. One version of a story is not necessarily more or less accurate than another, just that sometimes the perspective of the story teller may bring a few new insights on a topic

Technology is an ongoing evolution of experiments and improvements. In this chapter we look as the business of technology, as well as break through the myth of the lone inventor in a laboratory.