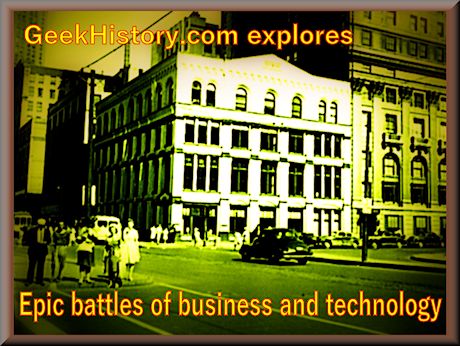 To put the "War of Currents" into perspective, it was a major victory for Team Westinghouse, and a major defeat for Thomas Edison, who lost control of Edison Electric over his stubbornness. Edison became infamous for unleashing a bag of dirty tricks to try to destroy Westinghouse. Instead of Edison the inventor going to the lab to invent a way to overcome the competition, he turned up a notch as Edison the shrewd businessman, and started a campaign to smear and discredit Westinghouse. Edison supported the creation of the electric chair to warn Americans that if they used AC power, they risked being "Westinghoused." Much to the pleasure of Edison, "Westinghoused" became a slang synonym for death by electric chairControl of Edison Electric was wrestled away from Edison by J.P. Morgan who merged it with Thomson-Houston Electric Company to form General Electric.

George Westinghouse prevailed not only on the technology side, but also on the business side as he fought various patent battles in the years that followed. George Westinghouse started as an inventor of railroad products like the air brake. Westinghouse understood that beyond having an idea, to profit from an invention one must undertake manufacturing and marketing as well.

The war over television

When I was young, always curious about science and inventors, I remember looking up who invented television, and remember reading that Vladimir Zworykin was the inventor of television.  I don't remember exactly what almanac or encyclopedia gave me that information, but for many years I took it as a fact that Zworykin invented television. Thanks to the commercialization of the internet in the 1990s I found a whole new world of information, and discovered that the invention of television was not a simple question to answer.  I also learned of a battle by the followers of Philo T Farnsworth to promote his cause as the inventor of television.

Philo T. Farnsworth was a Mormon who lived in Utah, not exactly the place for the hot bed of technology. While in high he filled several blackboards with sketches and diagrams showing his high school science teacher his ideas for an electronic television system.

Russian scientist and inventor Boris Rosing started experimentation on various aspects of electronic television in the late 1890s. As a young engineering student, Vladimir Zworykin worked for Rosing and assisted him in some of his laboratory work. Zworykin moved to the United States following the Russian Revolution in 1919. When he arrived in America, Zworykin worked at Westinghouse Electric Corporation in Pittsburgh.

David Sarnoff offered to buy Farnsworth's patents in 1931, with the condition that Farnsworth become an employee of RCA. Farnsworth refused Sarnoff's offer, and spend much of the next several years fighting David Sarnoff and RCA in the court room over television patents. Farnsworth eventually prevailed as RCA finally conceded to a multi-year licensing agreement with Farnsworth.  But Sarnoff and RCA would grab the spotlight as RCA introduced electronic television to the world at New York World's Fair 1939.

Even though Farnsworth won the battle, defeating RCA in court to uphold his patent claims, he lost the war as the Farnsworth Television and Radio Corporation never took off. Farnsworth sold his company to International Telephone and Telegraph (ITT) in 1951. Most people have heard of RCA (Radio Corporation of America), they went on to be a large and profitable company. Who knows of Farnsworth? Farnsworth's family continues to promote his name, and his claim to the invention of television.

Just an interesting side note, RCA was originally part of GE (General Electric), the company created during the War of Currents. In the 1930s the U.S. Department of Justice forced GE to give up their ownership interests in RCA. Decades later, in 1986 GE would once again acquire RCA. Interesting bits of tech history wrapped up in RCA.

There have been comparisons made to David Sarnoff of RCA as a driving force to establish the dominance of his company in the development of television to Bill Gates of Microsoft and his obsession to have Internet Explorer win the browser wars.

What often gets lost in the discussion of the internet is the final piece of the puzzle, the web browser, the client software that connects the desktop computer in front of you to a server somewhere else in the world. Mosaic was the web browser that led to the Internet boom of the 1990s.

American entrepreneur and computer scientist James Henry Clark and recruited Marc Andreessen, one of the creators of the Mosaic Web browser at the National Center for Supercomputing Applications (NCSA), to create Netscape Communications Corporation, and produce a web browser called Netscape Navigator, based on the Mosaic web browser. The world is ready to take on the graphical world wide web, and Netscape Navigator becomes the popular browser to "surf the web."

A lot was happening in the world of personal computing around 1995.  The graphical user interface of Windows 95 coming along at the same time the world was discovering the internet was the perfect storm for Microsoft.  Microsoft was releasing their new desktop computer operating system called Windows 95 which included a web browser called Internet Explorer.

The war was fought over Microsoft bundling the web browser as a part of the desktop computer operating system, a claim that would be challenged in the courts. The court room fights lingered on, with very little negative effects on Microsoft.

In 1997, Microsoft declares war on Netscape with the release of Internet Explorer 4. The war was officially on when a a group of Microsoft employees placed a large metal likeness of the Internet Explorer logo on the front lawn at Netscape Communications in Mountain View, California. In the five years that followed Netscape's browser market share went from more than 70% to less than 5%.

The life and death of Netscape Navigator is a brief history that spanned only about ten years. In the ten year period from 1993 to 2003, Netscape Navigator went from the web browser of the internet, to an after thought left in the dust.

What about Apple versus Microsoft

Some people might mention the battle of Apple versus Microsoft, but in a strange way over the years Bill Gates and Steve Jobs had a working respectful working relationship. In fact many present day Apple fanboys may not realize that back in 1997 Apple was on the verge of bankruptcy and Steve Jobs got Bill Gates to save the company with a $150 million investment.

In the case of the War of Currents, the television wars, and the browser wars, you had companies going toe to toe literally fighting against each other, one company was literally trying to crush the other.

The "who invented it" battle

The battles where business and technology mix is often the story of patent fights and court room battles. Online forums debate who did it first and point to patents.  Often the right to claim credit for an invention is often based on the the first person to patent the item and being part of the company that was the first to bring that item to the marketplace.

Invention is a word that is very fuzzy in common usage. Often what people say is an invention is simply a vision, an idea. It is interesting how many ideas are issued a patent without a working prototype being created. That gets into a big issue of intellectual property definitions, which gets way too deep for this conversation.

Closing with a bit of trivia. The first "invention" registered with the United States Patent and Trademark Office, July 31, 1790, was a formula for fertilizer.