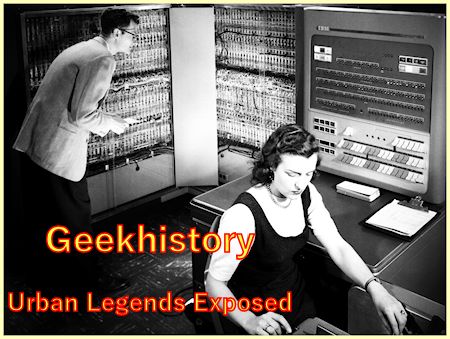 We believe the statement that you attribute to Thomas Watson is a misunderstanding of remarks made at IBM’s annual stockholders meeting on April 28, 1953. In referring specifically and only to the IBM 701 Electronic Data Processing Machine -- which had been introduced the year before as the company’s first production computer designed for scientific calculations -- Thomas Watson, Jr., told stockholders that “IBM had developed a paper plan for such a machine and took this paper plan across the country to some 20 concerns that we thought could use such a machine. I would like to tell you that the machine rents for between $12,000 and $18,000 a month, so it was not the type of thing that could be sold from place to place. But, as a result of our trip, on which we expected to get orders for five machines, we came home with orders for 18.”

Could the phrase, "we expected to get orders for five machines" from the 1953 stock holders meeting morph into the now infamous phrase, "I think there is a world market for maybe five computers."

Thomas Watson was one of the richest men of his time, a leading self-made businessmen and often called one of the world's greatest salesmen. If there was a time and place where Watson made the statement, "I think there is a world market for maybe five computers," it would be logical to assume there would be some record of it. Without a credible source of when the alleged quote was made we can only conclude it is an urban legend, not a factual statement.

Perhaps those who still believe IBM Chairman Thomas Watson made the statement in 1943 will point to some vast conspiracy or cover up.