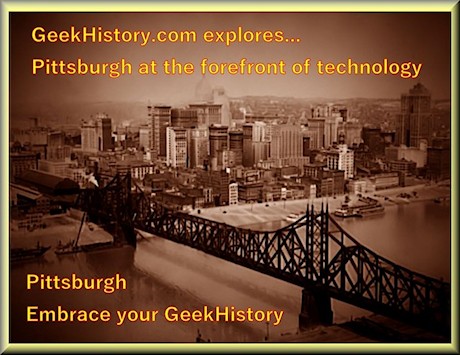 Many of the Westinghouse companies live on in mergers with other companies. Westinghouse gave the world safer rail transportation, steam turbines, gas lighting and heating, and electricity to the average American's home. Westinghouse planted the seed of innovation and put Pittsburgh on the forefront of technology.

War of Currents goes through Pittsburgh

The War of Currents is the famous business and technology battle between Thomas Edison and George Westinghouse over which method should be used to deliver electricity to American homes.

During the 1880s Thomas Edison began to construct electrical generating stations based on DC (direct current) power. Westinghouse believed that AC was a better method of power distribution, and believed that electric company founded by his rival Thomas Edison was structurally flawed in its beliefs of using DC power.  The concept of AC power distribution was not a new concept for Westinghouse, because he was also an inventor in the natural gas industry.  Westinghouse became interested in the inventions of European Inventors Gaulard and Gibbs and purchased the American rights to their patents for AC current transformers in 1885. Westinghouse and his staff worked on improving and redesigning the transformers, and the Westinghouse Electric Company was started in 1886.

Westinghouse was impressed with the work of Nikola Tesla and approached him about joining forces. Westinghouse brought the legendary master of lightning to Pittsburgh and purchased Tesla's alternating current patents on the electric systems and paid Tesla to work with him until they were fully implemented.

Everyone talks about the great inventor Thomas Edison, calling him the Wizard of Menlo Park. One of the biggest defeats in the career of Edison was the War of Currents, where Edison lost to George Westinghouse.

Although Canada takes credit for being the birth place of radio pioneer Reginald Fessenden, he would cross paths with George Westinghouse during the War of Currents, and eventually come to Pittsburgh. Because Edison lost the bid to light the 1893 World's Columbian Exposition in Chicago, he blocked George Westinghouse from using any light bulbs designed by Edison. Fessenden's invention of silicon-iron and nickel-iron alloys for the lead-in wires in electric light bulbs and the methods for sealing wires in a glass envelope gave Westinghouse an alternative to the Edison bulbs and allowed Westinghouse to fulfill his commitment.

Fessenden successfully made the first long-distance transmission on Christmas Eve 1906. The broadcast was advertised three days in advance of Christmas, telegraphed to ships of the U.S Navy and the United Fruit Co., which were equipped with apparatus intended to receive the broadcast. Fessenden broadcast his voice and his violin performance over the Atlantic, startling and mystifying sailors who typically were listening for dots and dashes and the occasional seagull, and heard "O Holy Night" instead.

When asking who is the "Father of Radio," you may start a debate over whether Tesla or Marconi should be given that honor. The name of Reginald Fessenden deserves mention as well.

Radio broadcasting takes off in Pittsburgh

Because of Fessenden's Pittsburgh connections Western Pennsylvania became the incubator of modern radio. Radio began as a one-to-one method of communication.

Westinghouse engineer Dr. Frank Conrad was a Pittsburgh area ham operator. Conrad played records for his friends over the airwaves. An executive at Westinghouse heard about Conrad's broadcast and asked Conrad to help set up a regularly transmitting radio station in Pittsburgh.  On November 2, 1920, Westinghouse's KDKA began regular broadcasts. They chose that date because it was election day, and the power of radio was proven when people could hear the results of the presidential race before they read about it in the newspaper.

As a young engineering student, Vladimir Zworykin worked for Russian scientist and inventor Boris Rosing and assisted him in some of his laboratory work. Zworykin moved to the United States following the Russian Revolution in 1919. When he arrived in America, Zworykin worked at Westinghouse Electric Corporation in Pittsburgh.

Zworykin had an opportunity to engage in television experiments at Westinghouse. His work on television resulted  in two patent applications. The first, entitled "Television Systems", was filed on December 29, 1923, and was followed by a second application in 1925 that was awarded in 1928.

In the 1920s David Sarnoff of RCA had the vision of developing television. In 1929 Sarnoff, a Russian American like Vladimir Zworykin, recruited him to develop television for RCA.  Sarnoff put Zworykin in charge of television development for RCA at their laboratories in Camden, New Jersey..

Here's a geeky history question I came up with while I was reading a book from 1909 published by George Westinghouse. I noticed that every reference to Pittsburgh is spelled "Pittsburg." I wondered, is that just something done by George? Was there ever a time when it was acceptable to spell Pittsburgh as Pittsburg?

Before Silicon Valley created computers Geek History was made in Pittsburgh.

Read more on The Legacy of George Westinghouse